Product Innovation: How AI helps bring your idea to life

An interview with Sachin Duggal, CEO of Engineer.ai

This podcast interview focuses on product innovation that has the power to democratize software development, and my guest is Sachin Duggal, CEO of Engineer.ai.

Sachin Dev Duggal is an innovator, serial entrepreneur, and an advocate of enterprise software that touches lives and benefits the world at large.

His profile is an unusual mix of experiences & serendipity. Sachin started his public foray very early in life. At the age of 12, he went on stage in front of 1200 people and the world media to demand something be done about the state of the environment. He worked for the United Nations and helped write the declaration of youth rights before he completed his first degree from Imperial College. At the age of 15, he co-founded nivio with a view to disrupt the old compute model. Four years later, nivio was selected as a technology pioneer at the World Economic Forum in Davos, where at the same time he made history in being the youngest attendees.

Sachin’s an avid and recent believer of Vipassana and that life is a zero-sum game – so its essential to spend our time giving; this is one of the main reasons he and his partner put aside stock in all major businesses to their foundation that’s on their 100×50 mission i.e. educate 100m kids in 50 years. 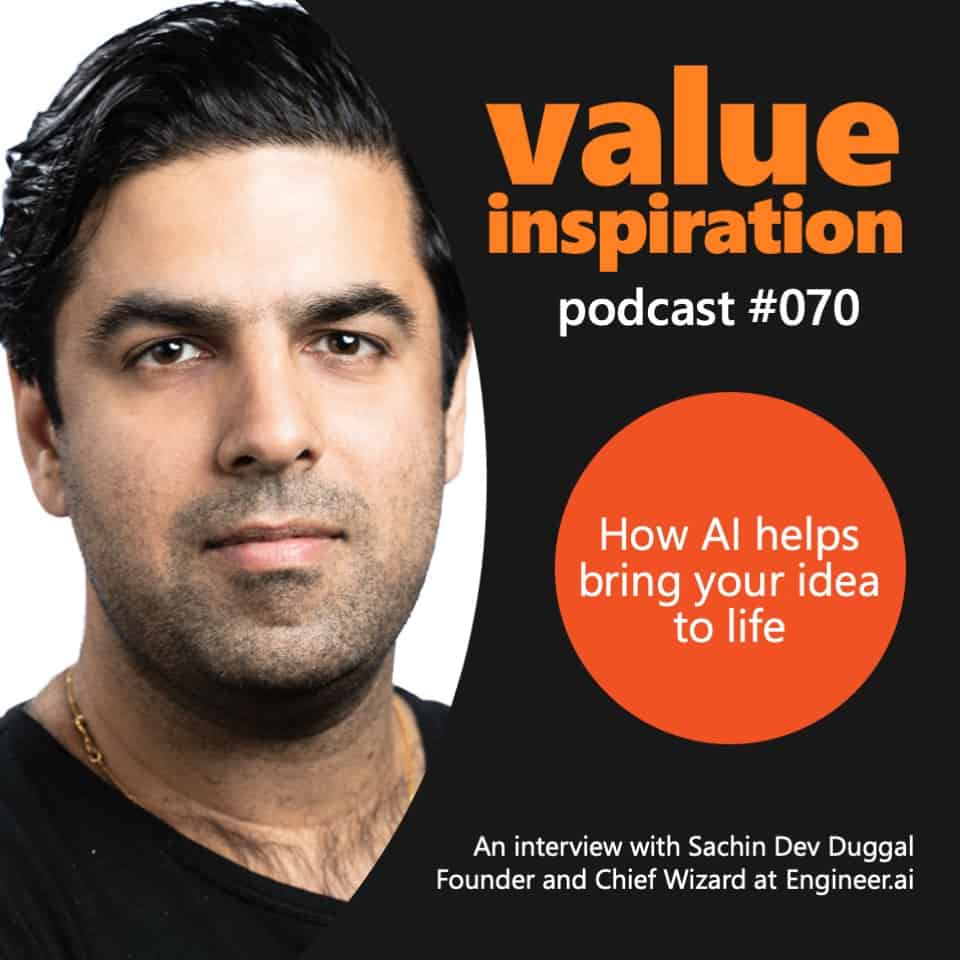 He’s been awarded MIT TR  35 Indian Innovator of the Year, the PriceWaterhouseCoopers Leader of Tomorrow, Ernst & Young Entrepreneur of the Year Finalist, the BBC Young Asian achiever of the Year and UNEP Global 500 Youth Award.

His aim is to build technology that simplifies the lives of everyday users and increases the penetration of information technology to those who do not have it today. And that’s what Engineer.ai is all about. Engineer.ai is on a mission to democratize software development. Their promise ‘Together we bring your idea to life. Twice as fast. 1/3 the cost. Enterprise-grade.’

That intrigued me, and hence I invited Sachin to my podcast. We explore the state of the market in which technology is often not delivering on its promise. Beyond that we address why the traditional approach to starting and delivering software projects is broken, and how a new, fresh approach, could transform things for the better, not only for large enterprises but also the small business owner.

“One of the things that I’m driven by every day is the ability for technology to transform people’s lives.

We’re in a world today where a lot of folks feel somewhat disenfranchised by the technology promise, something that was meant to help them grow, help them make more money, help them have more time at home. And instead, it’s done, in many cases, the opposite.

We think that there’s a really strong opportunity to transform how software is built.

We’re moving from a world where software means working with a cottage industry, where everything is slow, requires traditional know-how, is inefficient, and super risky.

And so, there’s often a tradeoff that we see in our customers between the fear of being irrelevant, then they come up with an idea, and then it’s basically the fear of failure.

Until they cross the line of fear, they’re not really building or moving ahead.