Product Innovation: How AI is positively influencing the science of buying and the art of selling

An interview with Heidi Messer, Chairman and Co-founder of Collective[i]

This podcast interview focuses on product innovation that has the power to transform how the enterprise does business. My guest is Heidi Messer, Chairman and Co-founder of Collective[i]

Heidi has been an active entrepreneur and investor in the digital economy since the commercialization of the Internet. She is the Co-founder and CEO of World Evolved, a platform for global investment and expansion. She is one of the founding members of the Zokei Network, a global network devoted to encourage innovation across art, science, business and technology. In addition, she is an active angel investor in and advises numerous startups. 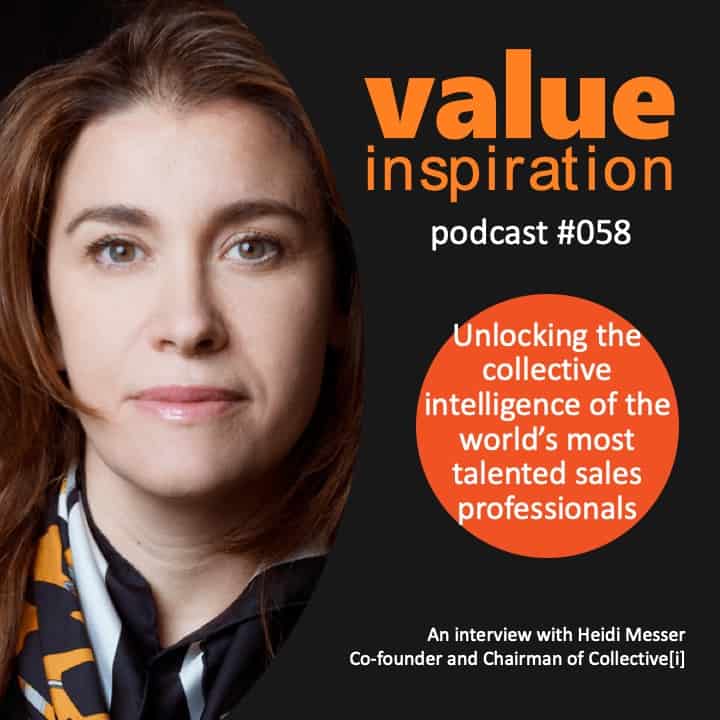 Prior to Collective, Heidi and her brother, Stephen Messer, co-founded LinkShare Corporation, which is host to one of the world’s largest online affiliate networks representing some of the largest and fast-growing publishers and merchants on the web. The company is widely considered to be a pioneer in the world of digital advertising.

Heidi is a frequent speaker at conferences around the world and universities on entrepreneurship, digital marketing and advertising, business intelligence and the Future of Internet services. She has been cited in various publications including, The New York Times, Inc. Magazine, and The Nikkei.

She has received several honors including being selected as one of 2012’s 100 Most Intriguing Entrepreneurs by Goldman Sachs.

The mission behind Collective[i] is to remove uncertainty and inefficiency around how B2B companies generate revenue through their sales organizations. They do so by using AI to remove tasks, identify important social connections and guide sales professionals to the activities that will yield the highest ROI. This approach often gets them referred to as the “Waze for sales” – And this triggered me to invite Heidi to my podcast

We explore why today’s salesforce is wasting 70% of their time on non-revenue generating activities, and why, in order to solve that challenge, you need to go beyond automation. As such we explore how the combination of network-based technology, community-sourced and proprietary data in combination with AI/ML enables to predict buying patterns and provide levels of visibility and actionability previously unattainable for sales teams

“My co-founder and I got together and said: “What is the next big opportunity?” after watching the marketing world transform, and we saw on the enterprise side and the revenue management side, specifically sales, as being the next big thing. That’s what led us to found a Collective[i], which is short for collective intelligence.”

“The entire enterprise will be transformed using a combination of data networks and artificial intelligence. And when I say transformation, what I mean is not automation. I think that’s a common misconception. Instead, what we looked at is; Where areas where humans are underutilized? Where are areas where their jobs have become something other than what they were originally intended? And for us, we looked at revenue and in particular sales organizations as a ripe place for this, where this technology could completely reorganize and allow human beings to shine and show their true talents.”

By listening to this interview, you will learn three things: