Product innovation: How amplifying the intelligence of groups with AI is the formula to create breakthrough improvements

An interview with Louis Rosenberg, CEO of Unanimous.AI 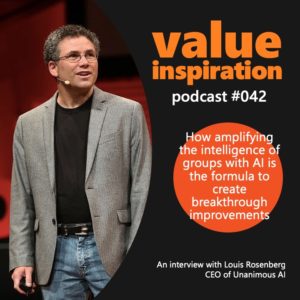 The theme of this podcast is product innovation, and in particular how the combination of AI and people can create value beyond the sum of its components. My guest on this week’ podcast is Louis Rosenberg, CEO of Unanimous.AI

Louis is a technologist, prolific inventor, entrepreneur, and writer. He attended Stanford University, where he earned his bachelors, masters, and PhD degrees. His doctoral work focused on robotics, virtual reality, augmented reality, and human-computer interaction, and resulted in the Virtual fixtures system for the U.S. Air Force, the first immersive Augmented Reality system ever built.

In 2014, he founded Unanimous A.I., an artificial intelligence company that enables human groups to amplify their collective brainpower by forming real-time “hive minds” modeled after natural swarms. Unanimous AI became well known in 2016 when its Artificial Swarm Intelligence technology (Swarm AI) made a series of accurate predictions about world events, including predicting the Academy Awards, the Kentucky Derby, the Super Bowl, and the rise of Donald Trump.

This triggered me, hence I invited Louis to my podcast. We explore product innovation concept of swarm intelligence, and how this fills an important gap in the evolution of AI.

“We amplify the intelligence of human groups by connecting people together in real time, using AI algorithms to enable them to make more accurate forecasts, more precise predictions, better assessments, judgments and decisions.

We use AI to turn network groups of people into artificial experts that can act as a superintelligence.

There’s actually a scientific name for that, called Swarm Intelligence.

In nature, Swarm Intelligence is the reason why birds flock, fish school, and bees swarm.

The inspiration for me was to say, “Well, if birds, and bees, and fish can get smarter together, why can’t people do it?”

The results that we started getting even early on were remarkable, that we could take a group of people and make them so much more accurate by connecting them together.”

By listening to this podcast, you will learn three things:

Do you want to get weekly tips and ideas around how to drive remarkable value? Simply subscribe to my newsletter “Value Inspirations on Friday”

Or subscribe to the Value Inspiration Podcast on your favorite channel