Product Innovation: The value we can unlock when technology enables people to speak up

An interview with Claire Schmidt, Founder and CEO of Allvoices 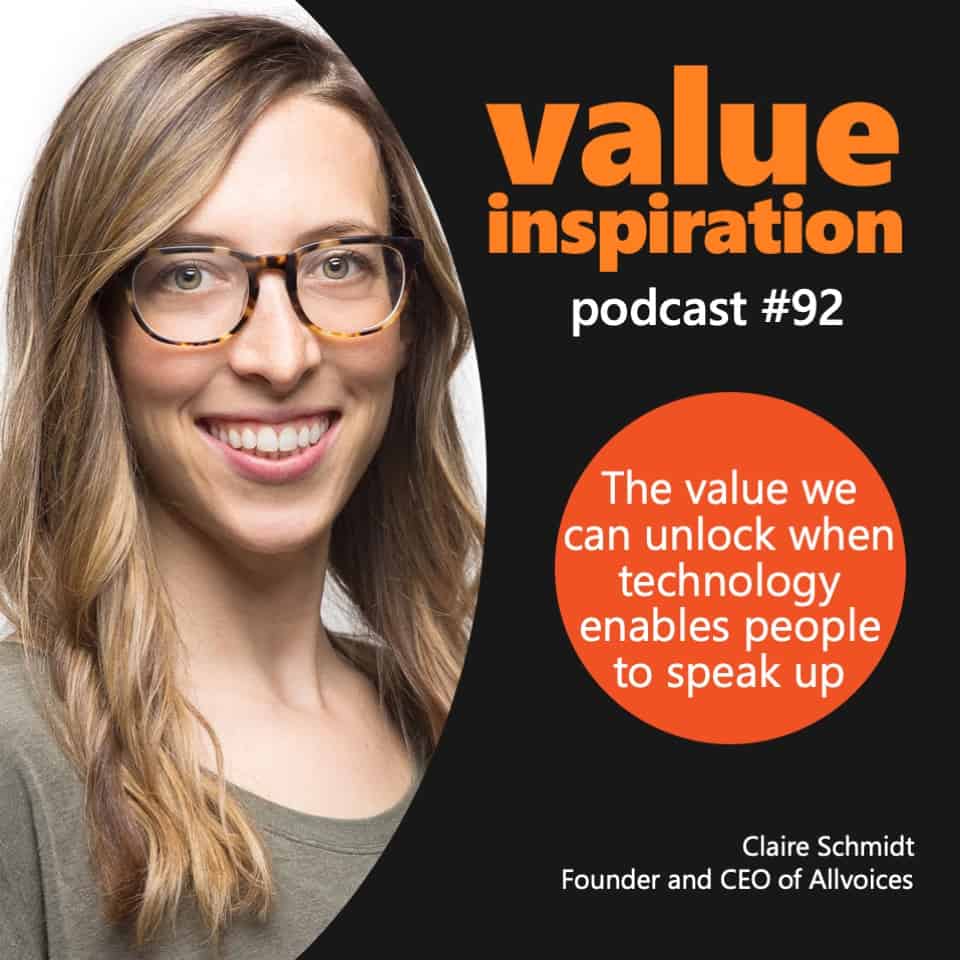 This podcast interview focuses on product innovation that has the power to revolutionize employee experience, boost business performance and solve an immense social problem at the same time. My guest is Claire Schmidt, Founder and CEO of Allvoices

Claire Schmidt spend the majority of her career in technology for social good.

She helped found and lead Thorn: The Digital Defenders of Children, a nonprofit organization which deploys technology in innovative ways to fight child sex trafficking.

During her five years at Thorn, Claire ran all programmatic work, spoke at the White House, the State Department, and Stanford University, and led a task force of more than 30 major technology companies, including Facebook, Google, Twitter, and Microsoft.

She also led social impact at Thrive Market, an e-commerce company focused on making healthy food accessible and affordable. Last but not least she served as Vice President of Technology and Innovation at 20th Century Fox.

Claire graduated from Stanford with a degree in Economics in 2006. She was the curator and vice-curator of the World Economic Forum’s Global Shapers Los Angeles, and in 2015 won a Mic50 award for her work at Thorn

End of 2017 she founded AllVoices, a tool that enables anyone to anonymously report workplace issues directly to leadership. This triggered me, and hence I invited Claire to my podcast. We explore what’s broken in today’s workplace due to the absence of tools like AllVoices, and how filling that gap will not only solve an enormous social problem, but also creates the potential to take employee engagement to a totally different level – with all the positive side-effects flowing from that.

I have spent the majority of my career working in technology and specifically technology for social good.

While I did that, I really saw for the first time, that technology does have a huge role to play in solving social problems.

I was most recently a vice president of technology and innovation at 20th Century Fox. And while I was there, I read Susan Fowler’s blog post about her experience at Uber. For me, that was sort of a wakeup call about the modern day reality of the workplace.

When I looked at the data, I found that 75% of people who experience harassment in the workplace, never reported it. So in that case, companies also don’t have the information they need to solve the problem, help the employee find resolutions and take action.

This seemed like a huge mismatch to me – something that was really worth putting in the time and energy to try and solve and address it.