This podcast interview focuses on product innovation around water transportation that has the power to solve some significant climate change issues. My guest is Jean Francois Barsoum, Canadian Leader, Smart Cities, Water and Transportation at IBM.

Since joining IBM, Jean-François Barsoum has provided strategy advice to a diverse set of clients: financial institutions, higher education, professional associations, pharmaceutical companies and telecoms. He has also been invited to speak at conferences on the subjects of innovation, smarter transportation and climate change on four continents. 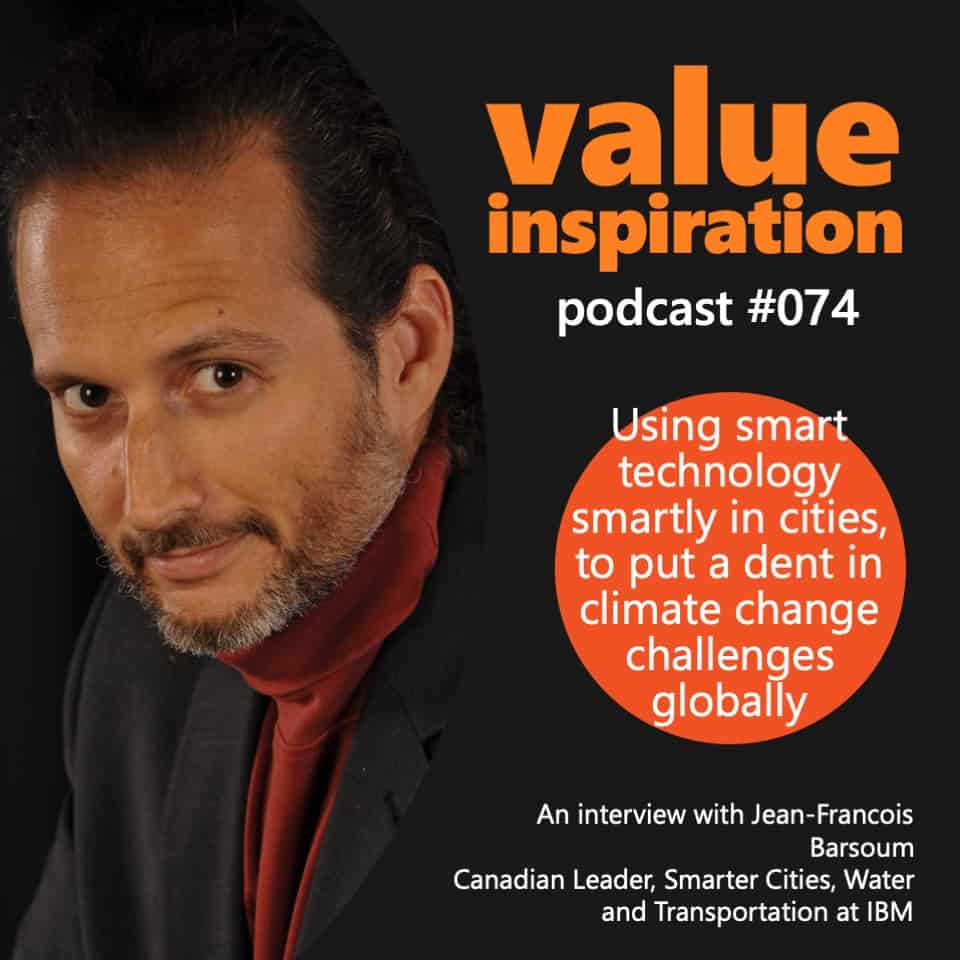 For the past decade, Jean-François has participated in numerous conferences on water and environmental management, and led IBM’s ties with some related research organisations and NGOs. He helped develop some core smarter cities concepts and has deepened IBM’s involvement with several North American cities as a result.

He is among the few Canadians trained by Nobel Peace Prize Winner Al Gore, and regularly presents the material seen in the movie ‘An Inconvenient Truth’ — and subsequent scientific updates — to audiences across Canada. He is on the board of the Climate Reality Project and of the Canadian Water Network, and is a member of the David Suzuki Foundation’s steering committee. He is also a member of the Intelligent Transportation Experts’ Committee, a forum initiated by the Quebec Association of Transportation (AQTr).

When I learned about Jean Francois’ ideas on how to utilize technology to solve some of our largest global challenges I instantly invited him to my podcast. We explore the size of the challenge and how, by using various technological layers together, we start to reimagine transportation the way we have come to know it. We also address the need for organizations at both public and private level to work closely together to maximize the potential of the impact.

What started it all was really a concern around environmental issues

The problem is so bad that in some urban areas, if you take a look at cities that were especially growing after the Second World War, so many of the North American cities, the space that is dedicated to cars is about two thirds of the surface area of the city.

So we dedicate twice as much room to our cars as we do to ourselves. And that is clearly not a sustainable or even preferable thing to do financially.

So there’s clearly a need to improve that. And I think that that’s where the interest of autonomous cars is.

Even assuming each individual car is not shared by multiple families at once, or multiple people at once, you could still reduce the number of cars by about a third just by sharing the existing cars that we have now.

And if the cars are autonomous, and could move from one place of the city to another, to correspond to demand, it’s quite possible, you could reduce the number of cars required by 80%.