Product Strategy: How to create triple digit ROI by applying AI and Machine Learning to our most common challenges.

An interview with Richard Boyd, CEO of Tanjo AI

This podcast interview focuses on product strategy principles that, if applied, have the power to deliver transformative innovation with triple-digit ROI. My guest is Richard Boyd, CEO at Tanjo.AI. 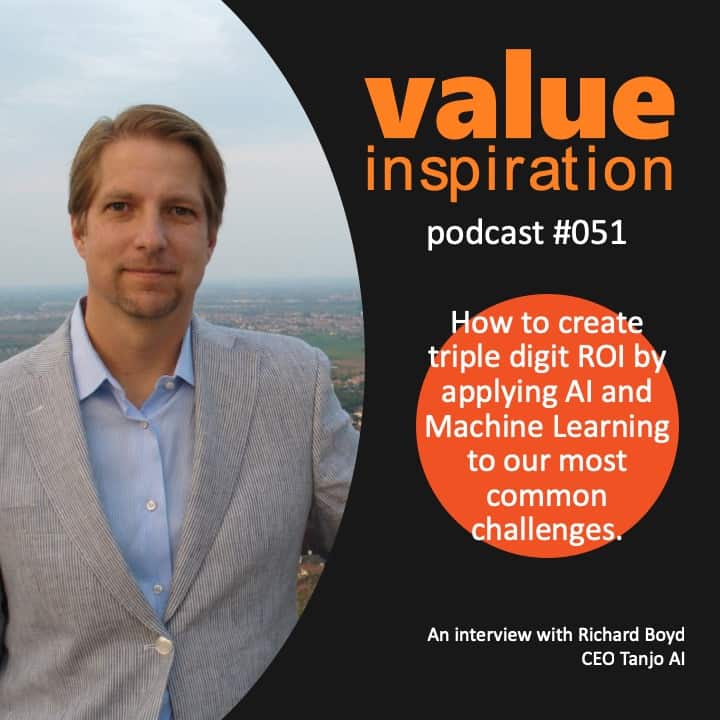 Over the last twenty-six years, Richard has led or helped create some of the most innovative game technology companies in the industry. He has served as a game technology consultant for a wide variety of industries including energy, healthcare, education and motion pictures. At Aerospace giant Lockheed Martin he created and led a group of innovative engineers and designers across all mission areas called Virtual World Labs. Richard joined Lockheed Martin in 2007 with the acquisition of 3Dsolve, a North Carolina-based computer game technology firm where he was founder and CEO.

Today he’s the CEO of Tanjo.AI, whose mantra is “improving businesses, industries, and people’s lives by bringing machine learning and automation to the world.” This triggered me, hence I invited Richard to my podcast.

We discuss how a pragmatic approach to solve everyday problems can result in transformative impact. We, too, often don’t realize the solution is right in front of our eyes, and the technology is already there to solve it.

Or, as William Gibson once quoted: “The future is already here, it’s just unevenly distributed.”

“The sort of thing that drives me is bringing technologies to bear on problems to solve them in ways that humans alone cannot.

it’s looking at whatever activity you’re engaged in, and trying to figure out, what should humans be doing with our effort and our attention? And what should we be turning over to machines? The answer to that question changes almost every year, almost every month now,

Organizations who understand that, and figure that out, will prevail. And those who don’t, not only won’t be competitive anymore, but they’ll appear to be handicapped very soon.

If you can do something one time and have it not only pay 10x return on investment, but have that return be an annuity… something you’re going to get every single year… the earlier you do that, the more effective and competitive you’re going to be.

That’s why everyone should be waking up and looking at this carefully.

You cannot afford not to look at machine learning”

By listening to this podcast you will learn three things: